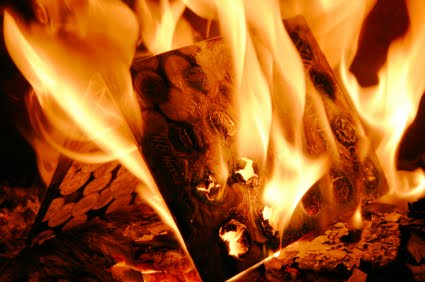 Image Courtesy of The Good Atheist

I chose this topic as one of my beliefs is that all people should have the right to read whatever they choose and that this choice should not be taken lightly. Those of us who have this choice should use it wisely.
My findings described below tour the words used to describe the destruction of books and the effects on society.
Biblioclasm
Biblioclasm sounds interesting right so let’s look at the dictionary meaning for biblioclasm which is “extreme criticism or destruction of books, especially the Bible”.
Libricide

Libricide  is kind of like pesticide but not quite the definition of libricide is the destruction ("killing") of books.
﻿
An example of Biblioclasm and Libricide is to burn books. In Nazi Germany books were burnt because they were written by Jewish authors or contained any political or cultural content that could have been seen as “Un –German”. More than 25,000 volumes were burned on one night, May 10th 1933.
﻿﻿
Book Censorship
Even the most evolved society still feels the need to control what its people should or should not be reading. Australia is no different our current censorship act of parliament is to restrict any publication/film or computer game if it "advocates terrorist acts".
Book banning is the most common form of book censorship. Books are banned for a large number of reasons:

Effects on society
In our ever changing society the role of a simple book, its contents and the ability to read has been and still is a way to influence how our society acts, thinks and does.  Wars have been fought over what one little book has said over what another book condemns, and is it fiction or non-fiction, does it contain supernatural or religious themes. All books are precious and reflect our society and culture past, future and present .
Cultural Heritage - By destroying a culturally significant collection such as the Jaffna Library in Sri Lanka, you destroy more than just paper and words you destroy that regions cultural heritage.

All items in the Jaffna library were destroyed with no way of replacement. This irreplaceable written/visual heritage gone because of civil unrest, politics and simply being afraid of knowledge contained with the library.

Happily the Jaffna library has been restored to its former glory, the original collection was destroyed but with lots of support from other libraries a new collection is evolving.

Knowledge - Any destruction of books or collections/libraries is a destruction of knowledge. Knowledge is power and it is often for this reason that Libricide occurs, someone already in power is afraid of the populace uprising and overthrowing that power.
Destruction of books/libraries during times of crisis is an easy target to inflame the opposing cause, books are the innocent bystander.


Freedom of choice -This would have to be the greatest of all the effects on society, loss of freedom to choose for oneself to be told what you can or can't do, read, see and learn. Book banning or removal of certain titles because of content is the worst way to take away an individual freedom of choice.  To lose this freedom is not something I a western educated female in a non third world country could even imagine or being to understand. I love to read and the opportunity to read anything is a great privilege.


Books are life changing, informative/educational. The freedom to choose what to read, the ability to use the knowledge gained to improve oneself should be a basic human right. Unfortunately even today the ability to read and to choose what to read is a luxury that many will not achieve. Whether by government, or other ruling bodies the right to read and/or to choose what to read can be taken away to keep the population under the government  rule by taking away either or both of these rights the population doesn’t think for itself, doesn’t dream,  imagine or learn about the rest of the world.
Reflection
On the whole the blogging process is not one that works for me. To me this process made my research feel disjointed and at many points I felt lost and overwhelmed. Having to post something every week was a struggle and a little confusing to my usual process of collection and then collation based on usefulness and relevance, finally writing up my findings ready to present. The weekly blog was a rush of this process.


I can see how useful a blog can be to convey information in such a way that is easily navigated, added to,  and commented on allowing the viewer to interact.Such information as events, book reviews and the like are easily placed in this format and I can see why so many libraries use blogs for these purposes.